Shiraz is one of Iran’s five largest cities located in Fars province.

shiraz The city is at an altitude of 1486 meter above the sea level and enjoys a temperate climate.
Shiraz used to be the capital city of Iran During Safarian, Buyids, and Zandieh dynasties. 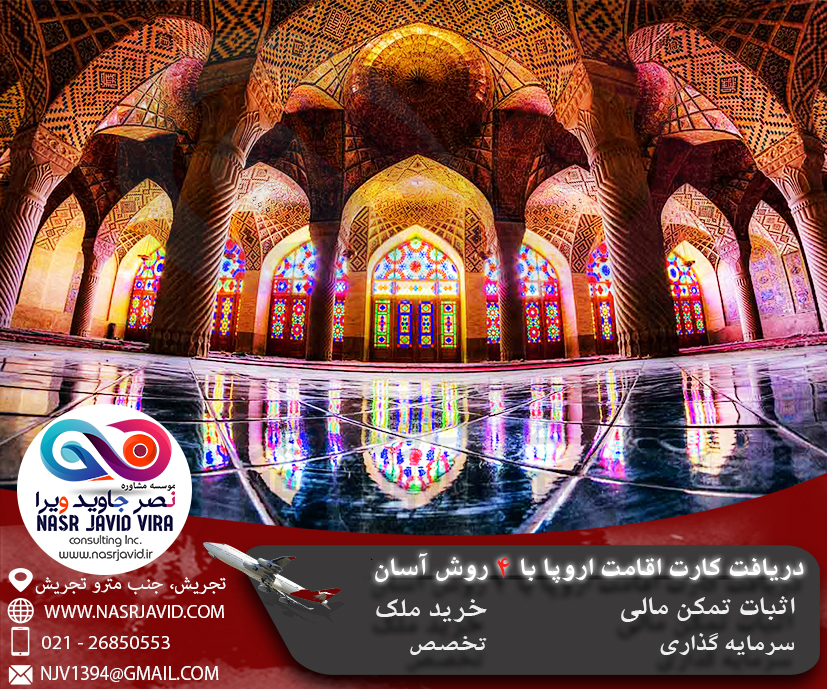 Eram Garden
Eram Garden is a historic Persian garden in Shiraz, Iran. Eram is the Persianized version of the Arabic word “Iram” meaning heaven in the Muslim’s book of Koran.[citation needed] Eram Garden therefore is so called for its beauties and aesthetic attractions resembling “heaven.” The garden, and theQavam House within it, are located on the northern shore of the Khoshk river in the Fars province. 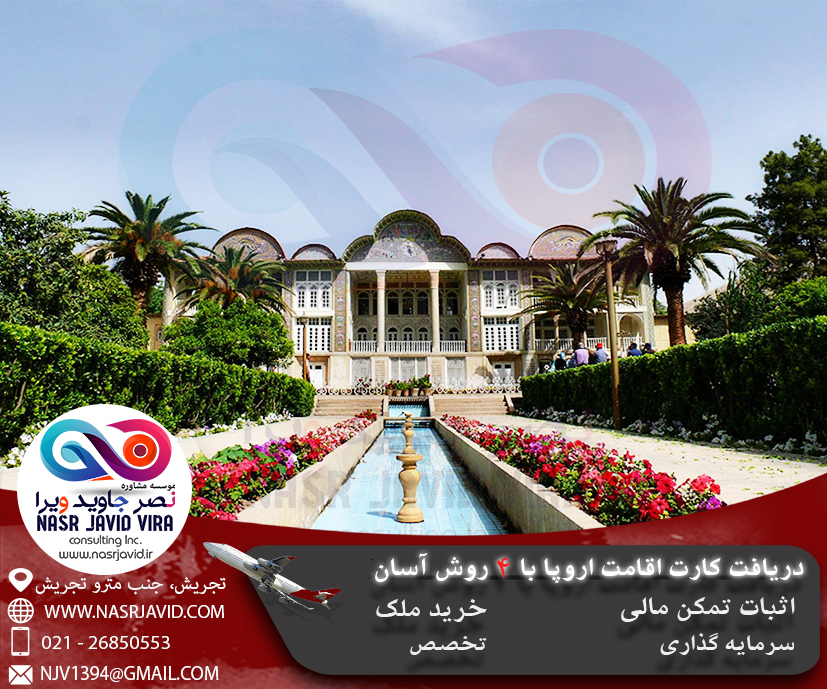 Tomb of Hafez
The Tomb of Hafez and its associated memorial hall, the Hāfezieh, are two memorial structures erected in the northern edge of Shiraz, Iran, in memory of the celebrated Persian poet Hafez. The open pavilion structures are situated in the Musalla Gardens on the north bank of a seasonal river and house the marble tomb of Hafez. The present buildings, built in 1935 and designed by the French architect and archaeologist André Godard, are at the site of previous structures, the most well-known of which was built in 1773. The tomb, its gardens, and the surrounding memorials to other great figures are a focus of tourism in Shiraz. 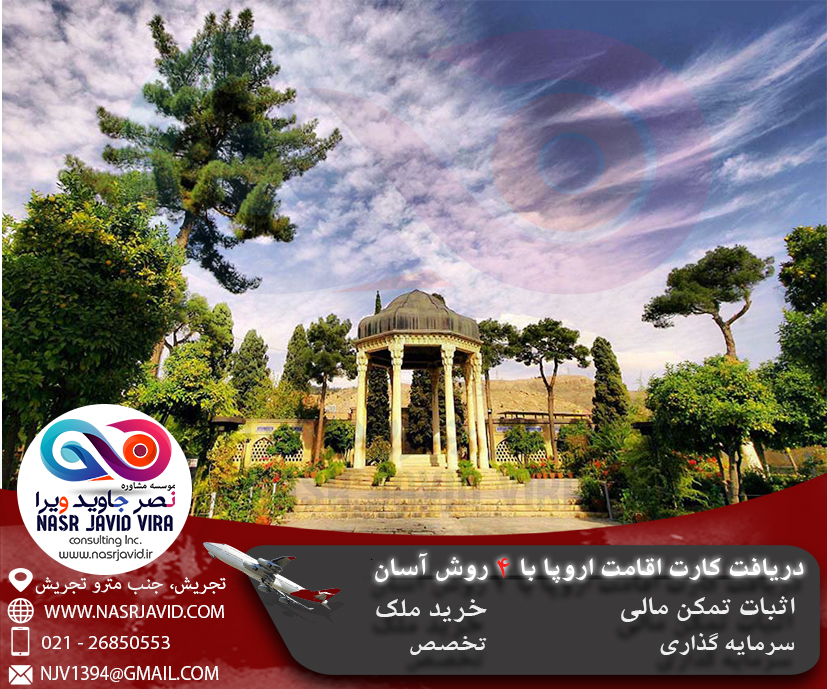 Qavam House
Qavam House (also widely called “Narenjestan e Ghavam”) is a traditional and historical house in Shiraz, Iran. It is set within the Persian gardens of Eram Garden.
It was built between 1879 and 1886 by Mirza Ibrahim Khan. The Qavam family were merchants originally from Qazvin. 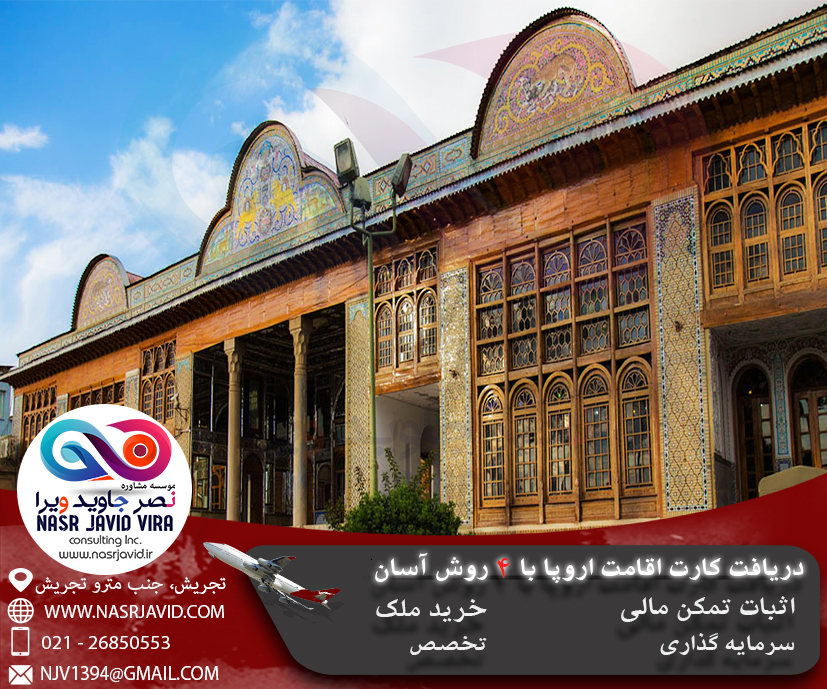 arg of Karim Khan
The Arg of Karim Khan is a citadel located in the north-east of Shiraz, southern Iran. It was built as part of a complex during the Zand dynasty and is named after Karim Khan, and served as his living quarters. In shape it resembles a medieval fortress. At times, the citadel was used as a prison. Today, it is a museum operated by Iran’s Cultural Heritage Organization . 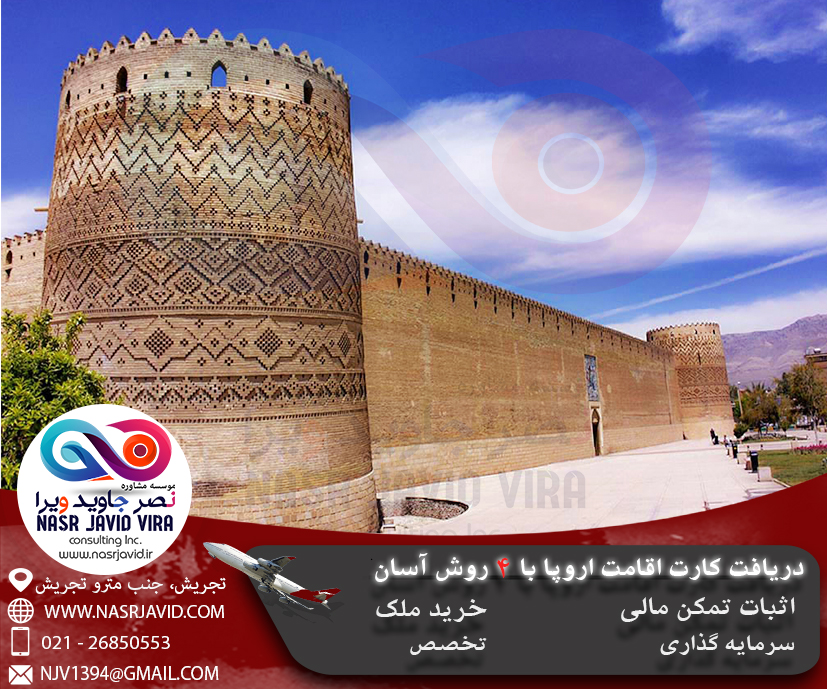 The Nasīr al-Mulk Mosque  is a traditional mosque in Shiraz, Iran, located in Goade-e-Araban place (near the famous Shah Cheragh mosque). The mosque was built during the Qājār era, and is still in use under protection by Nasir al Mulk’s Endowment Foundation. It was built by the order of Mirza Hasan Ali Nasir al Molk, one of the lords of the Qajar Dynasty, in 1876 and was finished in 1888. The designers were Muhammad Hasan-e-Memar and Muhammad Reza Kashi Paz-e-Shirazi. The mosque extensively uses colored glass in its facade, and displays other traditional elements such as panj kāseh- 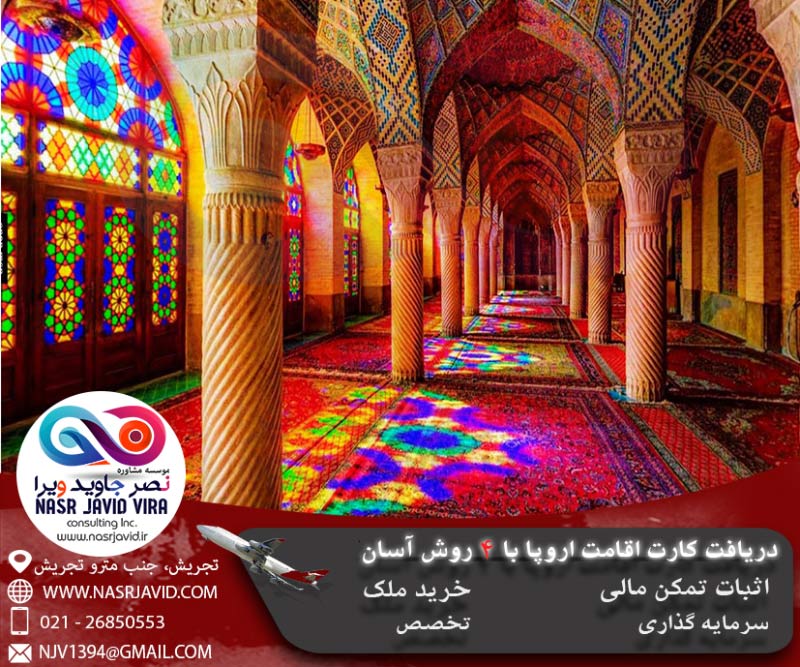 Pasargadae , the capital of Cyrus the Great (559–530 BC) and also his last resting place, was a city in ancient Persia, and is today anarchaeological site and one of Iran’s UNESCO World Heritage Sites. 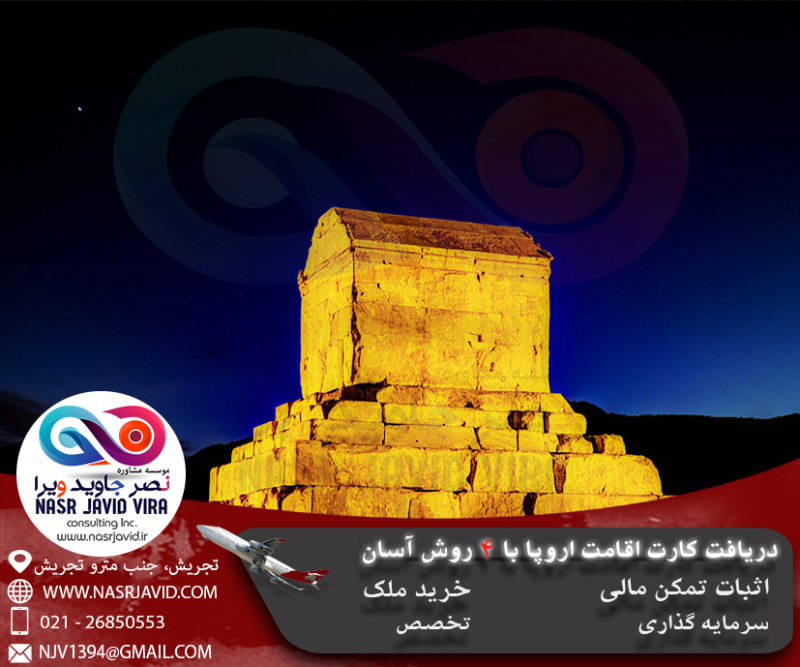 is a funerary monument and mosque in Shiraz, Iran, housing the tomb of the brothers Ahmad and Muhammad, sons of Mūsā al-Kādhim and brothers of ‘Alī ar-Ridhā. The two took refuge in the city during the Abbasid persecution of Shia Muslims. 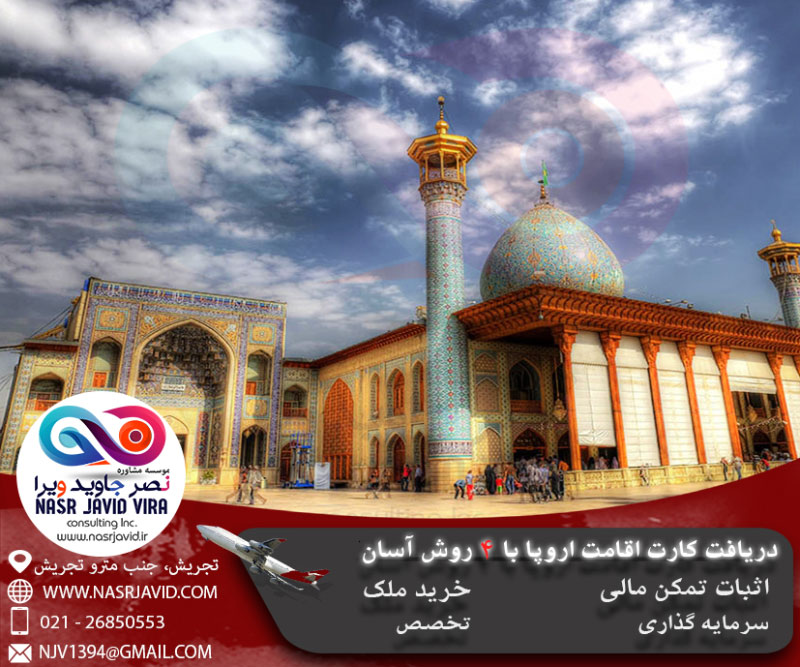 was the ceremonial capital of the Achaemenid Empire . Persepolis is situated 70 km northeast of the modern city of Shiraz in the Fars Province of modern Iran.

The earliest remains of Persepolis date from around 515 BCE. UNESCO declared the citadel of Persepolis a World Heritage Site in 1979.[1] To the ancient Persians, the city was known as Pārsa (“The City of Persians”). The English word Persepolis is derived from the Greek Πέρσης πόλις Pérsēs pólis (“Persian city”). In contemporary Persian, the site is known as  Takht-e Jamshid (“The Throne of Jamshid”), and  Chehel minar(“The Forty Columns /Minarets”) 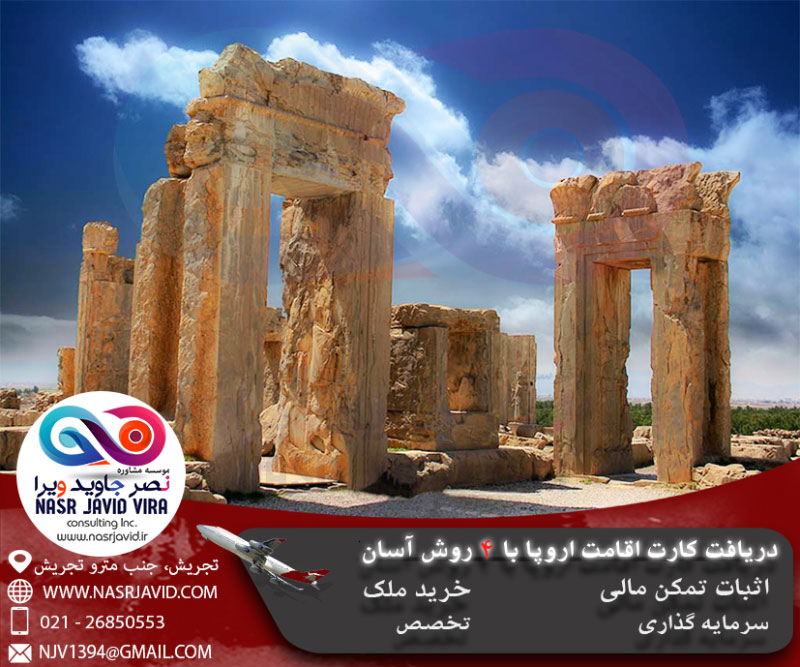 Qur’an Gate is a historic gate in the southern-central Persian city of Shiraz, Iran.

It is located at the northeastern entrance of the city, on the way to Marvdasht and Isfahan, between Baba Kouhi and Chehel Maqam Mountains near Allah-O-Akbar Gorge . 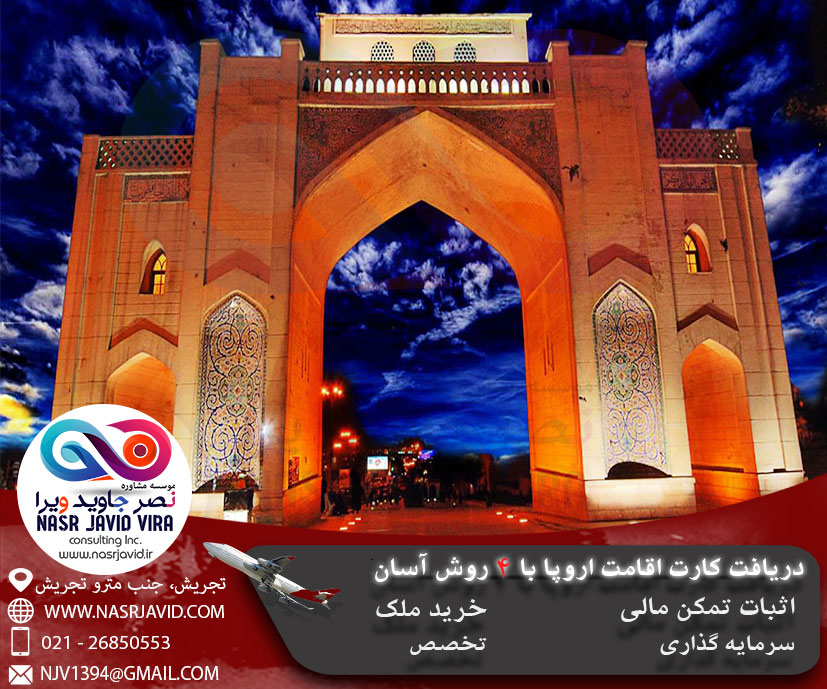 The Tomb of Saadi

is a tomb and mausoleum dedicated to the Persian poet Saadi in the Iranian city of Shiraz. Saadi was buried at the end of his life at a Khanqah at the current location.

In the 13th century a tomb built for Saadi by Shams al-Din Juvayni, the vizir of Abaqa Khan. In the 17th century, this tomb was destroyed.

During the reign of Karim Khan was built a mausoleum of two floors of brick and plaster, flanked by two rooms. The current building was built between 1950 and 1952 to a design by the architect Mohsen Foroughi and is inspired by the Chehel Sotoun with a fusion of old and new architectural elements. Around the tomb on the walls are seven verses of Saadi’s poems. 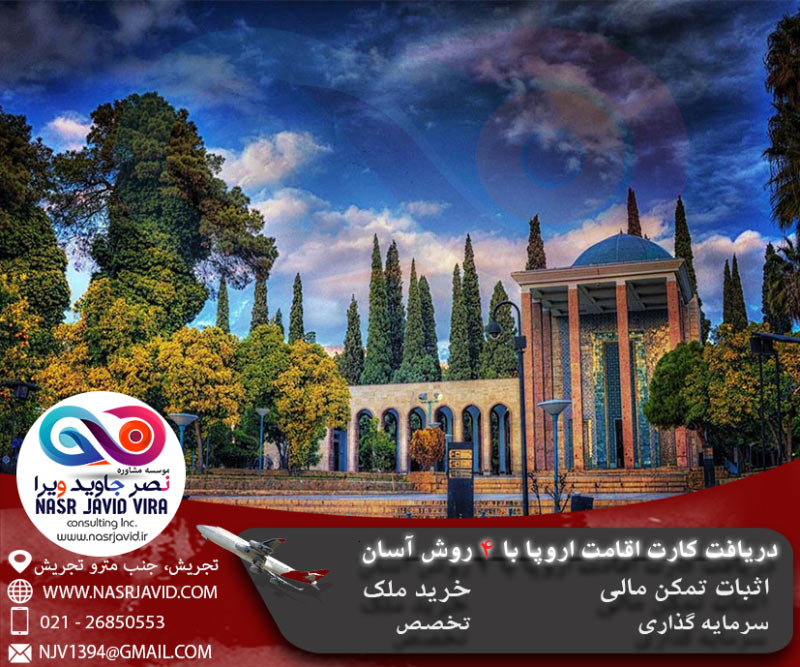 Shiraz International Airport  is located in Shiraz, Iran. It is the main international airport of Fars province and southern region of Iran.

After undergoing renovation and redevelopment work in 2005, Shiraz Airport was identified as the second most reliable and modern airport in Iran (after Imam Khomeini International Airport of Tehran) in flight safety including electronic and navigation control systems of its flight tower.

It is also capable of handling wide-body aircraft such as the Boeing 747, Boeing 777 and Airbus A340-600. In addition to domestic flights to most major Iranian cities, there are daily flights to major cities in the Middle East including Dubai and Istanbul. 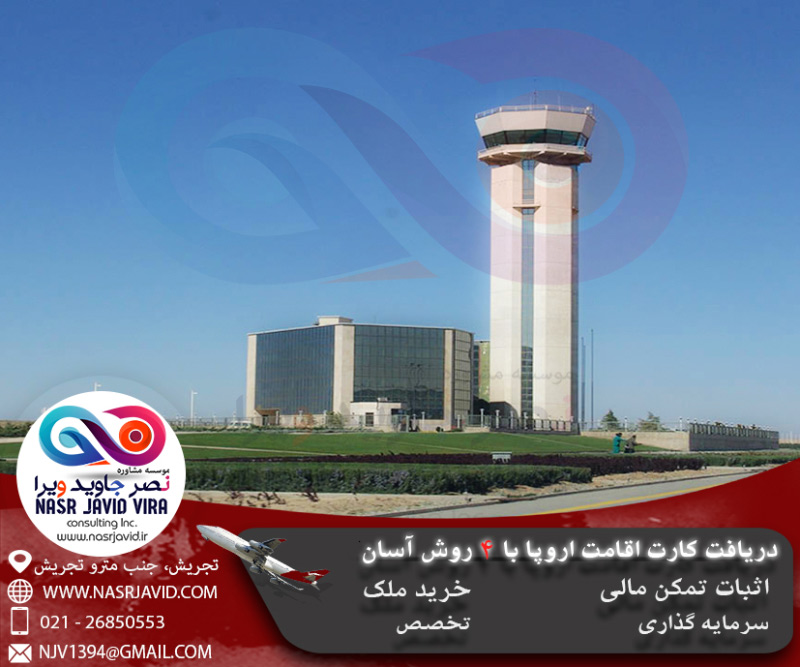